HomeHammerblogStar Trek Discovery: How to Boldly Blow a Pilot

Star Trek Discovery: How to Boldly Blow a Pilot 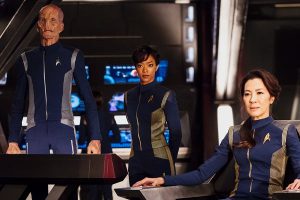 Star Trek has always had something of a checkered history with pilot episodes.  Back before the classic series run, NBC actually rejected Gene Roddenberry’s original pilot, “The Cage.”  Lore has it that the network suits thought it was too cerebral, but I’m guessing it might have had more to do with the slow, deliberate pacing and the aliens that looked like they had butts with bulging veins planted on their heads.  Still, many of the elements that Star Trek would soon make famous were there—most notably Spock, the Vulcan science officer, and the starship Enterprise herself in all of her glory.  NBC apparently saw something they liked, because they took the unprecedented step of giving Roddenberry a second chance at a pilot.

The resulting “Where No Man Has Gone Before” was a retooled vision of Star Trek, somewhat more action-oriented but still heavy on the science fiction.  Gone was the self-doubting Captain Cristopher Pike from “The Cage,” replaced by the more confident Captain James R. Kirk (later changed to James T.), and with him came the all-too-human Dr. Leonard “Bones” McCoy, who could always be counted on for a drink and some sage advice whenever the captain needed it.  And there was, of course, Spock, the only character to make it from the previous pilot.  Word is the suits wanted him gone, but Roddenberry managed to keep him on because chicks seemed to dig the pointy ears. The rest, as they say, is history.

Fast forward to 1987, and we have another Star Trek pilot, this one for the Next Generation.  Titled “Encounter at Farpoint,” it was also famous for its production troubles—and for having a bald-headed captain in the form of Jean-Luc Picard, who was about as opposite from Kirk as you could get.  The result was also something of a hodgepodge, with an unfamiliar cast of characters mixing it up with an omnipotent alien entity, and the episode ending with a giant space jellyfish floating off into the great black yonder.

But that was Next Generation for you.  It was known as a kind of Hamburger Hill for writers for the first couple of seasons, and saw a lot of turnover in those days—but the series eventually found its footing, and even cranked out some of the best Star Trek episodes ever produced during its seven year run.

The point is, great things can spring from inauspicious beginnings.

Which brings us to Star Trek Discovery.

Inauspicious isn’t quite the word for it.  A muddled mess might be a better description.  A series that doesn’t at all know what it wants to be would also be accurate, but still wouldn’t do it justice.  More than anything, the pilot episode feels like the television equivalent of a first draft manuscript that somehow sneaked past the editor and made it out the door without anyone looking.

Let’s start with the opening scene.  It’s beautifully shot, with our two main characters—Michael Burham (played by The Walking Dead’s Sonequa Martin-Green) and Captain Georgiou (Michelle Yeoh from Crouching Tiger, Hidden Dragon) on some desert planet, doing one of those Federation missions that seem to exist primarily to get our protagonists in trouble.  Except that there’s no trouble here.  There’s no alien threat, no hostile force trying to stop them, no mystery they have to solve.  They just walk around, spouting off dialogue so excruciatingly expository that it would make a fanfic author cringe, killing enough time to bring the audience up to speed on who these two people are.  Then they reach their destination—a water well that’s been blocked up somehow.  This, supposedly, threatens the entire species that lives on the planet.  Who are they?  We don’t know.  And I guess we’re not supposed to care either, because after a couple of blasts from a phaser rifle the well is cleared, the water is flowing and it’s mission accomplished.

That wasn’t such a chore now, was it?

Then they have to walk around some more, because an approaching storm is interfering with their communicators or something.  As it turns out, though, the storm is really an excuse for a dramatic reveal—because up in the sky, dipping below the clouds, we see the sleek outlines of a Federation vessel swooping down over our intrepid explorers.  It’s titular starship Discovery, come to pick them up!

Except it’s not.  The ship is actually the Shenzhou.  And it’s on board this vessel that the rest of the pilot will unfold.  Even though the series is called Star Trek Discovery, the starship Discovery will not make an actual appearance.  I guess they’re saving that for later.

Now I know that these are nitpicks—but they’re pretty indicative of the problems with the pilot.  We’re introduced to ship that will not figure into the rest of the series.  We’re also introduced to a captain whose fate pretty much becomes clear the moment we see she isn’t going to be the main captain on the show.  So already, everything that happens in the pilot is mere prologue.  That makes it very difficult to become invested in any of the characters, because we know that we’re probably not going to see any of them for very long.

Then there’s the matter of the Klingons.  They figure quite prominently in the pilot as well, although in this incarnation they’re almost unrecognizable.  Sure, they still have the lobster foreheads we’ve seen then sporting ever since Star Trek: The Motion Picture, but in Discovery they look as if somebody stuffed the orcs from Lord of the Rings into Gary Oldman’s costumes from Bram Stoker’s Dracula:

Worf would most certainly not have approved.

Speaking of vampires, the albino Klingon Voq is a dead ringer for the bloodsucker from Buck Rogers in the 25th Century:

The dental appliances make it sound as if the actors are talking with a mouth full or marbles, so it’s a good thing all of their dialogue is subtitled.  Even so, given how slowly they’re forced to speak, it’s amazing that any of them could give orders quickly enough evade getting blown up by a Pakled ship.

But hey, the human dialogue isn’t much better.  George Washington with his famous dentures didn’t spout as much wood as the poor actors on this show, which makes me think that the outtakes are probably pretty hilarious.  Granted, it’s not as bad as, “Hold me, Anakin, like that time you did on Naboo,” but it does make me wonder if they might have hired George Lucas as a script doctor.  Next time, they might want to see if Quentin Tarantino is still interested in the job.

With all that said, it’s not like Star Trek Discovery is all terrible.  There is some beautiful production design here, and it’s obvious that a lot of care and effort was put into making the series.  There are also some nice little Easter eggs sprinkled throughout, with subtle references that point to arcane bits of Trek trivia that will make hardcore fans smile.  If, however, CBS really wants to use Discovery as a linchpin for its streaming service, it will need to attract more than those hardcore fans—and to keep the fans tuning in, the showrunners will have to step up their game.  If the writing doesn’t get better, I’m afraid that this Trek will be a short one.

This article originally posted at The Resurgent.

“Some nice, noirish twists and one badass female character I wish Iâ€™d invented myself. Marc Giller certainly knows how to write.”