The Seven Deadly Sins delineate the path to a person’s downfall, the surest way to achieve eternal damnation. But there is a way out, a way to reclaim salvation: blame it on the demons taunting you, daring you to embrace these sins and you shall be free. The painful truth is that these impulses live inside all of us, inside all sentient beings. But alas, one person’s sin may be another being’s virtue.

How’s that for a blurb? 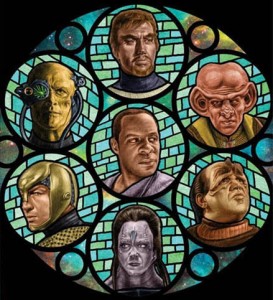 My involvement with this anthology was a real treat, in that I had been a fan of STAR TREK for years–as my very first, and most decidedly terrible, novel can attest. It was also a bit serendipitous, in that I had my literary agency ring up Simon & Schuster on a lark in the hopes of pitching them a story or two. I really didn’t expect much to come of it, but to my good fortune the editor in charge of the TREK books at the time–a marvelous chap by the name of Marco Palmieri–had taken a look at my novel HAMMERJACK and thought that my cyberpunk sensibility just might work for a compliation of novellas he had in mind. Marco wanted to use the greatest villians in TREK lore as an allegory for the Seven Deadly Sins, and asked me if I wouldn’t mind taking a crack at the Borg. My answer, of course, was an expletive followed quickly by the word yeah!

The story REVENANT is my contribution to the bunch.  Essentially a haunted house tale set in the darkest reaches of space, it’s part sci-fi, part action thriller, but mostly straight-up horror.  In fact, I was surprised at what Marco let me get away with.  Then again, he did say that after all the beatings the Borg had taken on VOYAGER that he wanted to put some fangs back in what were STAR TREK’s scariest villains.  If the blood flying is any indication, consider them re-fanged!

The pride of the Romulan Empire is laid bare in “The First Peer,” by Dayton Ward and Kevin Dilmore.

A Ferengi is measured by his acquisition of profit. “Reservoir Ferengi,” by David A. McIntee, depicts the greed that drives that need.

The Cardassians live in a resource-poor system, surrounded by neighbors whohave much more. The envy at the heart of Cardassian drive is “The Slow Knife,” by James Swallow.

The Klingons have tried since the time of Kahless to harness their wrath with an honor code, but they haven’t done so, as evidenced in “The Unhappy Ones,” by Keith R.A. DeCandido.

Humanity’s darkest impulses run free in the Mirror Universe. “Freedom Angst,” by Britta Burdett Dennison, illustrates the lust that drives many there.

The Borg’s desire to add to their perfection is gluttonous and deadly in “Revenant,” by Marc D. Giller.

To be a Pakled is to live to up to the ideal of sloth in “Work Is Hard,” by Greg Cox.

“Marc Giller proves himself a respectable newcomer to the canon.”